Skilled Construction Labor needed, where did they all go?

Here is a perspective that has merit. We often here about the need of skilled labor. We had lots of skilled labor once. Jeffery Sparshott from the WSJ has some thoughts on this.

The Wall Street Journal has chronicled builders’ complaints about a shortage of construction workers and wondered why the labor pool appears so shallow when employment levels are still well below those of the boom years.

Indeed, industry-wide employment cratered from 2006 to 2011, losing nearly 2.3 million jobs. It’s gotten well less than half of those back. Where did they all go?

Well, the Census Bureau’s job-to-job flows program tracks workers as they move in and out of industries. The data isn’t that easy to use and underlying microdata isn’t public, but agency economists Hubert Janicki and Erika McEntarfer dove in recently and came up with some interesting findings.

Among construction workers who became unemployed for more than three months between 2006 and 2009: 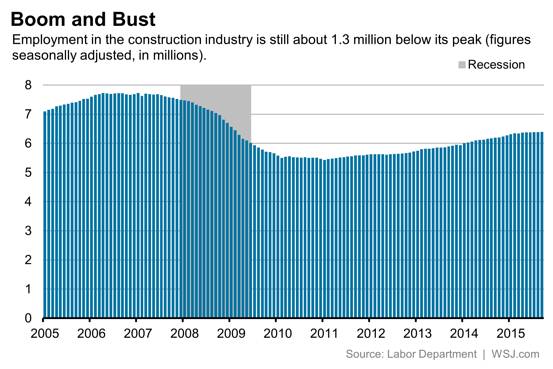 The two researchers also looked at industry hiring to come up with another possible reason for a tightening labor market within the construction sector: Simply, construction companies didn’t hire enough young workers.

“The percent of hires accounted for by the 19-25 age group declined from approximately 18% at its peak before 2006 to 13% in 2012-13,” Janicki and McEntarfer said. “In comparison, the composition of hires of workers in the 25-34 and 34-44 age groups shows much more modest declines over this time period.”

Those young workers went into other industries.

In short, our analysis of the data suggests that 60% of displaced construction workers have left the labor market or moved into other industries. Although some former construction workers transitioned quickly to other sectors, for most, a move into another industry occurred after a long spell of nonemployment. Also likely contributing to a shortage of experienced workers is a shift in hiring preferences—during the downturn construction firms hired fewer young workers, fewer young workers gained experience in the industry, and the share of older workers grew faster than in other industries.

”Here at Laub Builders we always knew we built an energy efficient home but had no idea how efficient or how to prove it. With the HERS rating performed by your company we have a thorough & detailed report to do just that to our customers.“ – Laub Builders

”East Penn Energy Solutions provided outstanding service from beginning to end. They gave a professional assessment, with absolutely zero, if not less-than-zero sales pressure, telling us where we would get the most improvement for our investment, and what, while good, was probably not cost-effective.” – E. Tars Philadelphia